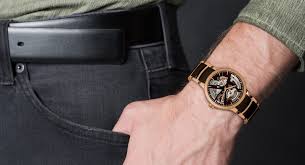 Rado is a sub-brand of the Swiss luxury watchmaker Swatch. Their company’s history stretches back to 1917, making it one of several in the Swiss watchmaking business. They stand for elegance, nobility, and status. Rado, since its start, has been synonymous with the highest standards of sophistication. They may find those qualities and more in the Rado brand. It is a sign of elegance, nobility, and status.

Because of this, they have earned a reputation as one of the watch industry’s most innovative companies. Original Rado watch may cause you to question its authenticity, and you’ll need a dependable resource to tell if the one you’re wearing is fake or not. If you already own a Rado watch but are unsure of its authenticity, you can visit any official Rado retailer or Rado Service Centre. It’s going to be challenging if you don’t, but this article has you covered.

Any high-end wristwatch worth its salt should, at the very least, be resistant to scratches. You might think that this has always been the case with watches, but it wasn’t until Rado merged hard metal with sapphire in 1962. The latter was standard in the toolmaking sector before being adopted by Rado in their watch production.

This company was also an early adopter of sapphire crystal, a material now often utilized in various applications. They combined these two components to make an attractive watch with an oval case that would continue to look new for decades. This timepiece is now available as part of Rado’s DiaStar Original line, which pays homage to the original’s innovative design. Despite common belief, it can still withstand a scratch test.

The DiaStar Original, their first model with this technology, is undoubtedly the most iconic example of a Rado vintage watch, and then in 2002, they released the V10K. As early as 1962, Rado was already producing timepieces with groundbreaking scratch-resistant technology. The sapphire and diamond watch stood out from the crowd thanks to its ultra-precise Swiss quartz mechanism, which its rivals couldn’t match.

The V10K moniker comes from the watch’s impressive hardness rating of 10,000 Vickers. Just to give you some perspective, diamonds are the only other material in the world that can claim such a ranking. With this small idea, they got their names in the Guinness Book of World Records for all time.

Two years before it released the Apple Watch to the public, in 2013, Rado integrated touch technology into its ceramic watches by infusing the case with four sensors that would allow you to adjust the time simply by swiping your fingertips on the screen.

The Hyperchrome Ceramic Touch Dual Timer, the company’s latest iteration of a touch technology watch, features six sensors and a subdial that can show a second time zone. To advance the clock by an hour, swipe your finger to the left and to the right to skip ahead by 10 minutes. When you touch the casing at the 3 and 9 o’clock positions, the time zone displayed on the main dial will switch to the subdial.

When it comes to innovation, Rado is one of the few brands that never stops. The organization has not stopped thinking outside the box, coming up with designs that defy convention and motivate employees to break through to the next level of innovation and technical mastery. The company unveiled a brown ceramic Hyperchrome in 2015, making it the newest addition to this series.

Rado never ceases to astound even the harshest of its critics, but this shouldn’t come as a surprise given their dedication to continually meeting the standards they’ve set for themselves. Since its inception as a manufacturer of watch movements, Rado has been at the forefront of the global luxury watch market. The brand’s name will go down in history as one of the all-time greats in the industry.

The scratch-proof watch was a stunning piece of jewelry with gold, ceramic, and diamond accents. Rado women’s watches are now widely available online, but this wasn’t always the case. The business has been creating watches for over fifty years but didn’t introduce its first model just for ladies until 1996. They called it the Diaqueen, and it was a model. Gold, ceramic, and genuine diamonds came together to create this one-of-a-kind timepiece for women. It was all the rage at the time since it was both stylish and scratch-proof.

When it comes to high-end timepieces, Rado is a name that immediately comes to mind. By making timepieces that make you feel proud to wear them, Having a solid knowledge of this watchmaker’s history will help you advance in your chosen field. Just click the link up top, or head on over to TheWatchCompany.com, to learn everything about this watch and the other models this company has available.